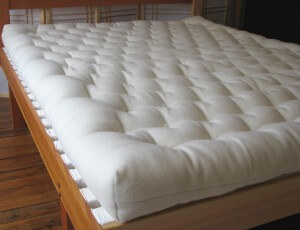 No matter what you believe or stand for politically or environmentally, organically produced mattresses may be one of the smartest well thought out products since the invention of the wheel. They are not chemical free since everything is made up from chemicals, but they are virtually free of toxic chemicals we can inhale throughout the night which make them a smart alternative choice. Add to that the inclusion of durable natural rubber, many are modular and customization, you not only have yourself a durable mattress but possibly  one of the most well rounded mattress choices on the bedding market today.

What makes them organic is their nearly toxin free design.

The top surface cover is organically designed from the renewable resource of cotton. Cotton is grown on land that is third party certified as organic which also complies with federal organic guidelines. The cotton is certified organic and is documented as such through strict oversight. This supervision is put in place and helps to educate consumers assuring them that the textile is virtually free of harmful pesticides or herbicides used in the growth process. When you are shopping be sure to ask for copies of 3rd party organic certifications that prove this process.

Should I be concerned about added chemicals in my mattress?

New Federal laws for mattress safety have been questioned due to the methods of making a mattress fire retardant. A good majority of mattresses being made are made safer by retarding flames but most likely fall short of safety due to the exposure of chemicals like Boran, Boric Acid and Antimony, which are known to be harmful to humans. Companies declare that only trace amounts of these chemicals are used and pose little or no threat to you and your family, yet we really don’t know the effects especially the long term effects from sleeping in mattresses that have not been properly tested and include disclosure of the results. Most salespeople haven’t a clue and law labels which require disclosure of product content do not require such information to be shared with the consumer.

Wool as natural fire retardant in organic mattresses: Learn Why

Fire barriers in organic mattresses often use a cotton fabric cover which by itself has a  (410 °F) fire point, this is the temperature at which it will continue to burn for at least 5 seconds after ignition by an open flame). The cover usually encapsulates an organic wool filling that by itself has higher ignition temperature than other natural textile fibers commonly used which is about  (600 °F).  This too by itself is not enough to pass federal mandated standards. Higher levels of nitrogen and sulphur limit wool’s ability to ignite. Because this wool needs higher levels of oxygen atmosphere around it to speed up combustion. The limited concentration of oxygen because it has been compressed in the cover makes it difficult to ignite, and once burning, the flame spreads at a much slower rate. The new law established by Consumer Product Safety Commission does not require the beds to be fireproof, only flame retardant. During the mandatory safety testing  heat levels cannot not exceed 200 kW (during a 30 minute test). In the second test heat levels are limited to a maximum of 15 MJ within the first 10 minutes of testing.

For this reason many organic mattress manufactures are now opting to use certified organic wool as their flame retardant of choice. The sheep are raised on organically certified land and are raised in a world that is nearly toxin free. The environment they are raised in even prohibits things like antibiotics and growth hormones

The short story, our government as of July 1 2007 said all mattresses must comply with regulated standards. Mattress manufacturers were forced to meet these standards or face huge fines. Our feeling is that this directed and designed to protect smokers from themselves. There are nearly 350 deaths, 1,750 injuries a year according to the CPSC. While this law may have been brought on by bad personal safety choices like smoking in bed and the need for activists and the government to protect these people from themselves even nonsmokers like myself has now been forced to pay the higher price in both terms of mattress costs and exposure to added chemical fire retardants added to today’s mattresses. These higher costs are a result of expensive research, development, related raw material costs and yes even a federally required paper trail of mattress production process.