The Strange Sleep Habits of Five Geniuses: Would You Like To Be One of Them?

Sleep is essential to our health and productivity. Many people wonder how the great minds of our time managed to create artistic masterpieces, lead countries, or develop unique inventions on a full night’s sleep. The short answer is that some of them shunned sleep as inactivity, and therefore, unproductive time.

Here Are The Five Geniuses with Different Sleeping Habits

Many geniuses, such as Tesla and Edison, utilized the power nap, in which they would sleep for twenty minutes, awaken refreshed, and continue working. However, not all prosperous individuals held this belief. Some, such as Churchill and Einstein, chose instead to take advantage of their downtime and make the most of their rest time.

Einstein, the renowned American theoretical physicist who is remembered for his theory of General Relativity, was quite generous in his sleep habits. Not only did he get ten hours of sleep each night, he also often took naps during the day. He believed in a full night’s sleep in order to be productive during the day and actually got over the recommended eight hours of sleep nightly. It seemed to work out well for him.

Tesla was a famous inventor of a variety of useful ideas, tools, and technology that helped form our current reality including alternating electrical current, the remote control, and induction motors. His creations were before their time.

Unlike Einstein, Tesla was not into getting excessive amounts of sleep. In fact, he would only sleep a couple of hours a night. It did affect his health by the time he turned 25, so he compensated for the lack of rest with power naps taken throughout the day. 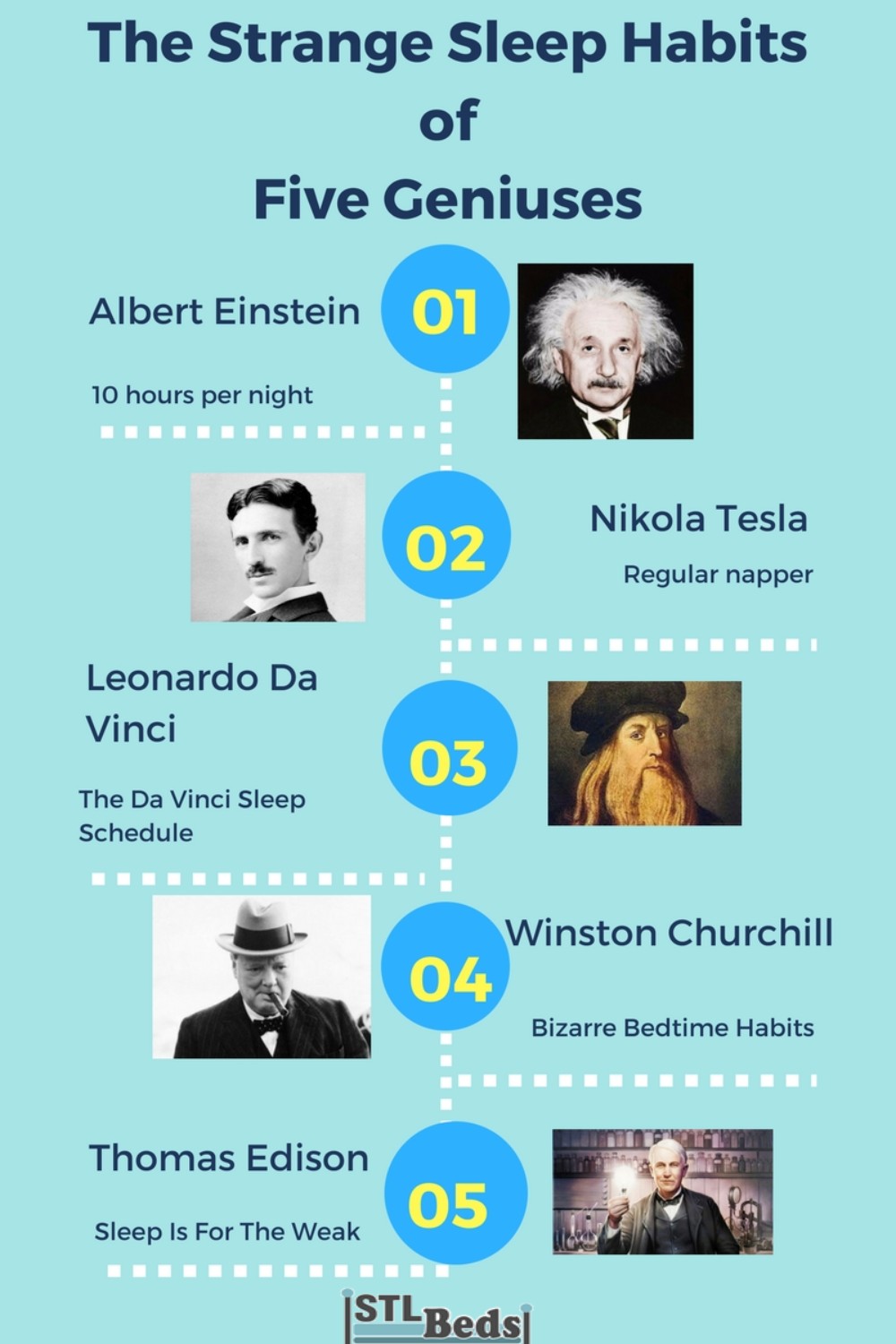 Da Vinci was an accomplished painter, most noted for his Mona Lisa with her mysterious smile. However, he was also a well-known inventor of a myriad of contraptions. His sleep was as unique as his artwork.

Da Vinci slept for about five hours throughout each 24-hour period; however, he was never resting for longer than 20 minutes at a time. This polyphasic sleep process became known as the Da Vinci Sleep Schedule and consisted of many short power naps throughout the day and night. He preferred this method of sleep so that recharging did not require a large chunk of his time that he’d rather devote to other endeavors.

It is generally accepted that this type of sleep pattern will not provide the body with enough downtime needed to remain mentally and physically healthy.

Churchill held a major role in British history, including a prominent leader during World War II. He was a British statesman, army official, and writer who served as the Prime Minister of the United Kingdom for about ten years.

When it came to sleeping, Churchill was serious. He kept a bed at the House of Parliament, stating that naps were one of the reasons he was such a great leader. Around 5:00 each day, he was said to have sipped on weak whiskey and soda, then fall into a two-hour nap. Some people claimed that Churchill managed to pack in half a day’s worth of work in every 24-hour period due to these strange sleep patterns. His schedule was so odd that he was known to hold war cabinet meetings while having a bath.

Thomas Edison: Sleep Is For The Weak

Edison, for whom we have to thank for the light bulb, did not hold sleep in high regard. He avoided or reduced the amount of time he slept as much as possible, feeling that resting was just a tremendous waste of time.

Like Da Vinci, Edison used a polyphasic sleep cycle so that he could free up as much waking time as possible to dedicated to his work.

Obviously, there is no correlation between quantity of sleep and genius; however, it’s interesting to see how these individuals approached recharging their bodies and minds.

It’s important to remember that sleep deprivation is not a healthy state. Far too often, people place value on action and wakefulness, but without the proper amount of rest, one is likely to experience physical and mental issues, as well as a marked drop in productivity.

While you don’t necessarily need to sleep like Einstein or Churchill, it’s still wise to get your full eight hours of sleep before trying to take on the world.