Sleeping Warm in the Winter

Sleeping is a great way to pass the time during the dark, cold nights of winter. That is, unless you’re cold. Sleeping warm in the Winter is a struggle. Being chilled to the bone makes falling to sleep more difficult. Being downright cold makes it almost impossible. This is not a new phenomenon of modern times, but rather an age old problem that probably dates back to the first cavemen and women before they discovered fire.

Generations before now found solutions for sleeping in the cold. The first being fire. That’s a good one. Thank you, Caveman or Neanderthal. Great job! Most solutions have stemmed from that initial one. 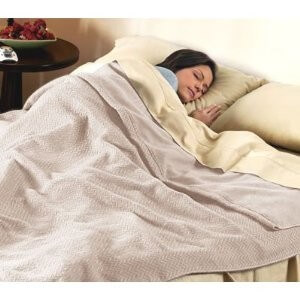 During colonial times, bricks or tiles were heated by the fireside, wrapped, and placed at the foot of the bed to keep toes warm for at least long enough to doze off. During Victorian times, bed warmers which resembled a brass or copper popcorn popping pan with a long handle were filled with hot stones and passed between the sheets to warm the bed before retiring for the night. During the early 20th century in Sweden, families saved the pits from cherries, sewed them into a bag, and placed it near the fireplace to warm before tucking it into bed with the kids. In the mid-20th century, hot water bottles were used.
Despite all the advances of the 21st century, are human beings still struggling to stay warm in bed? Sometimes, it seems easier to send a man to the moon than it does to warm his feet.

Some of the options to stay warm are low tech and are no more advanced than the methods of our ancestors. Sleeping in warm cotton or wool socks, wearing flannel pajamas even a flannel nightgown/ pajamas are good options but are nothing new although the fabrics are often now flame retardant. Adding extra blankets is not a new development either. Pioneers made a lot of quilts for very good reasons. Placing an extra blanket over the foot of the bed will help keep toes warmer, but again this isn’t new technology.
During the last decade, jersey or flannel sheets have gained in popularity because of their ability to make the bed a warmer, cozier prospect. Placing a humidifier in the room is known to add moisture to the air and in turn makes the room feel warmer.
Perhaps, the most modern technological advancement in sleeping warmer has been the invention of the electric blanket in 1912 by American Dr. Sidney Russell. This early version was used beneath the bed to keep tuberculosis patients warm. It wasn’t until the 1930s that electric over-blankets were invented. The new over-blankets were bulky and prone to fires, but advances in technology have made them safer and more energy efficient over the years.

Build It And They Will Stay Warm

Modern humans sleep warmer at night than their ancient ancestors, but until recently really no warmer than a person from three or four generations ago. The last modern advancement for warmer sleeping was not the solar blanket. Engineers and scientists have not ignored the idea of warmer sleeping technologies and have striven to come up with sleep warm products  the sandman couldn’t of dreamed of.
Are You Keeping Warm ?