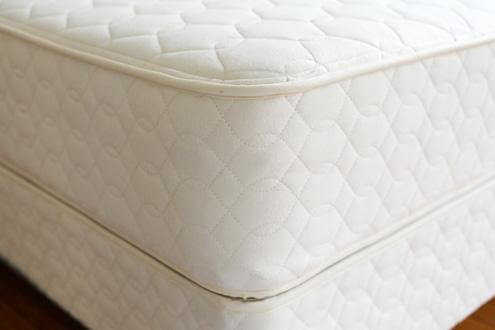 As you consider the next mattress you’ll be buying, you may be confused when you hear about “organic mattresses.” Does such a thing exist? Are they truly organic? What makes them so different from the conventional mattress? Are they better for your health? Finally, why do they cost so much?

An organic mattress doesn’t contain any harmful additives. Some of the materials found in conventional mattresses contain volatile organic compounds or VOCs. This off gassing can cause adverse reactions in some people. These may lead to symptoms such as headaches and nausea. These compounds have also been responsible for damage to the liver, kidneys and central nervous system.

In older times, mattresses were made completely from materials that came from nature. It seems that we are returning to that trend. Like food ingredients, you probably don’t want something in your mattress if you can’t pronounce it.

Just What Is an Organic Mattress?

To answer this question, it’s probably easier to explain just what’s found in an organic mattress. Look for wool, cotton and organic latex. These products go through a strict regimen to carry the certified organic labels they carry. One of the requirements is that they have not been treated with pesticides or any toxic chemicals. To comply with fire retardant regulations, makers use organic wool which passes the required tests with flying colors. This along with the quilting process and higher ignition temperatures is the secret to passing. Again, there are no destructive flame resistant chemicals.

We mentioned organic latex. While that might seem to be an oxymoron, organic latex is a natural ingredient, coming from rubber trees. Grown and and harvested naturally the final product again must pass rigorous third party certified testing. Another easy way of answering the question above is to explain their other features. Like organic food organic mattresses are virtually free of toxic chemicals. Now that we know the potential harm that can result from exposure to potentially dangerous chemicals that cause illness, organ damage and even cancer we may have a little more information regarding organic mattresses.

You need to be careful, because some brands are part-natural, part-synthetic can make up the large portion of construction with higher percentages being synthetically engineered . Look for products that have a percentage of natural ingredients—and less with the ingredients used in a conventional mattress construction. When you look for a 100 percent organic mattress, both the core and main portion should be natural latex (which comes from the rubber tree).  However, if you’re looking for a 100 percent organic mattress, then just remember each materials that makes up that bed must be 100 percent natural and organically grown and certified by a third party with integrity as certified organic.

Benefits of an Organic Mattress

The organic mattress is generally accepted as hypo-allergenic. Even though it has organic wool, if you’re allergic to wool, we have found that most do not have a negative response to the organic variety. Also, like organic food, natural latex rubber in an organic latex mattress uses virtually no toxic chemicals in the construction process. This way, the mattress itself can act as a self-ventilating system, which helps to remove irritating allergens (from other sources) and moisture away from the mattress surface and your skin. Additionally, the organic wool naturally transports any moisture away from the mattress, which helps to prevent the development of mold and dust mites.

Organic mattresses are nearly completely free of harmful chemical toxins. Basically this means unlike regular mattresses with polyurethane foam (made from oil) they have no synthetic chemicals in them.

The latex was harvested from rubber trees that were grown on plantations complying with all organic regulations. These mattresses have also not been steeped with flame retardants that have been implicated in the development of cancer.

An organic mattress is made with the most breathable materials; wool, cotton, and natural rubber which all work in together to help regulate your body temperature while you’re sleeping.  Components like organic latex have the ability to help your body maintain a consistent and comfortable body temperature through out the entire night. When the atmosphere is moist, the wool acts to absorb moisture, which keeps a thin layer of insulating air next to your body.

The organic wool also helps to insulate the mattress, which aids in your bedtime comfort year-round. In the winter, you’re warmer; in the summer months, you’re cooler. Additionally the wool was sheared from sheep who lived on certified and tested farms that meet strict regulated standards that include also being free of dangerous and harmful pesticides.

Organic mattresses are much more durable, due to the latex rubber used in them. The latex lasts longer, resisting breakdown and keep feeling good 2-3 times longer than ordinary brand name mattresses.

Organic cotton is similar to organic wool in its high degree of durability. Think of the quilts you may have that were made using organic cotton. They last forever.

An organic mattress is sustainable and biodegradable. The organic latex is renewable, which means it doesn’t add to the pollution of our planet. When latex is extracted from rubber trees, it is tapped, allowing the trees to stay upright in the ground. One rubber tree can give its latex for up to 30 years.

Cotton that is grown organically won’t have a severe impact on our environment. Water conservation is practiced and their is no toxic pesticides running off into drinking water.  Cotton that is labeled organic  and is being grown in the U.S. is  forbidden by federal regulations the use of any genetically engineered seeds in planting.

When you lie down on an organic mattress, you feel its support. At the same time, you don’t feel extreme pressure on any sensitive pressure points. This happens because the organic latex works to distribute and distribute pressure evenly over your whole body. The organic wool has natural, small air spaces between its fibers. This helps to cushion your body and, again, reduce pressure points.

You’ll notice that an organic mattress made with organic latex is extremely comfortable. It molds to the contours of your body. It won’t compress down and become hard. Because of the high degree of elasticity of organic wool, it won’t compress with time. Instead, it returns to its original shape.

Organic wool is naturally fire resistant. This being the case, a mattress made with organic latex won’t need to have chemical retardants used to treat it. Organic wool has a naturally occurring protein called keratin. When keratin combines with the moisture the wool fibers collect, it’s hard for the wool to ignite. Lanolin is another substance found in organic wool. If a match is thrown onto the wool, the wool won’t burn. Instead, it just chars slightly and self-extinguishes once the flame source is removed.

Babies rest easily on organic crib mattresses. The organic wool fibers crimp or develop small ridges and folds. This helps the mattress to cradle the baby, soothing it so it sleeps comfortably. It also helps to regulate baby’s temperature, winter or summer.

Is an Organic Mattress Worth the Cost?

Yes, organic mattresses are worth their cost when dollar cost averaged over their lifetime. They often last 2 to 3 times longer than ordinary brand names and beds in boxes. When you start looking, see for yourselves, because you’ll be putting down between $2,000 and $5,000 for a set. Compare this to about $1,000 to $4,000 for a conventional mattress that doesn’t have have the beneficial features.

When you look at the cost and consider all of the benefits it provides, you’ll decide that it is worth it.

Limited options also means that, if you want that one particular type of organic mattress, it may not be available—yet.

Because of the all-natural materials, organic mattresses cost more than conventional mattresses.

Conventional mattresses are chock-full of chemicals and pesticides, most of which may cause reactions, allergies and serious diseases. Let’s start with those chemical flame retardants. The intention was good, but the risk to our health isn’t so good.

As of July 1, 2007, mattress sold and made in the U.S. have to meet flame retardant guidelines as established by the Consumer Product Safety Commission.

Some of these chemicals are implicated in causing cancer; they are toxic.  For instance, boric acid (yes, the same thing you sprinkle around to kill cockroaches) is highly toxic to young children. People who are unaware of the dangers of boric acid are getting sick; when they put their children on mattresses adulterated with this substance, their children get sick.

Here’s an alphabet soup list of some of the chemicals found in mattresses:

If you can’t pronounce the names, do you want to sleep on a mattress containing them?

Let’s look at the tongue-twisting chemical names above. It’s these chemicals that have been used in farming that are now being accused of causing such serious illnesses in people.

Polyurethane foam is widely used as cores support padding and surface cushioning in conventional mattresses. It’s been identified as a cause of eye and skin irritations. Breathing in the fumes has been said to lead to lung damage, respiratory problems, asthma, skin and eye irritation and other possible adverse effects on your health.