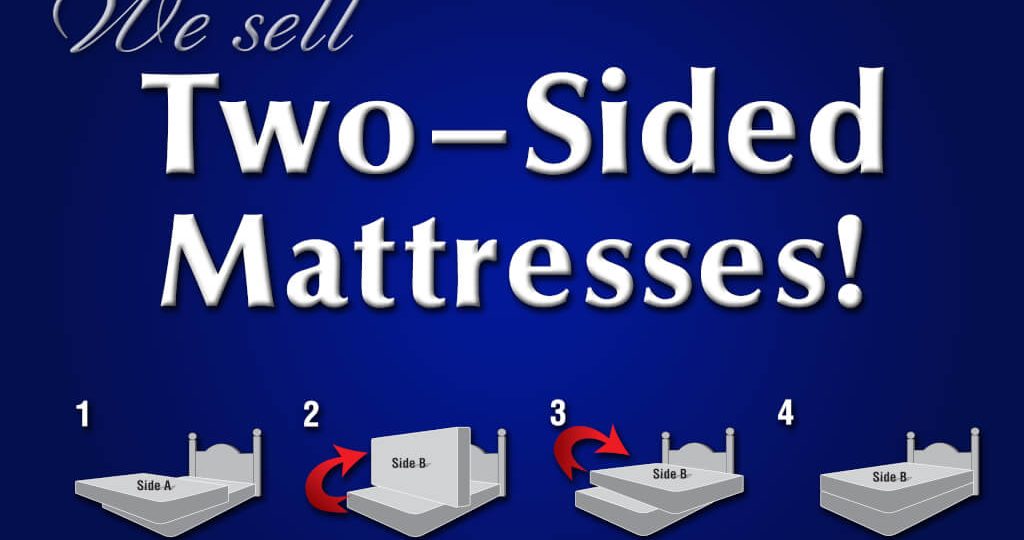 Are Two Sided Mattresses Better Than One Sided No Flips?

Are Two Sided Mattresses Better Than One-Sided No Flips?

This may be the most frequent question we are asked, Are Two Sided Mattresses Better Than One-Sided No Flips“? Besides, do they still make two side mattresses? The reasoning is that today’s mattress owners and shoppers are extremely concerned about growing industry problems that do not seem to be getting any better. The two primary issues are mattresses that lose their original shape leaving body impressions and the untimely result of premature wear and the loss of comfort and support in mere months not years. The problems arise when customers spend big money and listen to the sales hype about thick plush one-sided mattresses.

Customers often comment that quality mattresses are a thing of the past and ask if beds can ever be as comfortable and long-lasting as they once were. Others go so far as to blame the problems on a manufacturing shift to comply with mandatory government fire safety laws requiring burn testing that is easier and cheaper with one-sided mattress models. This is a law and a mattress building method that led to the industry-dominated one-sided mattress design. A trend started by brand name mattress builders that trickled down to tier two manufacturers building their beds with only one side as well.

There is an old saying in the mattress business “If you don’t know anything about a mattress then purchase it by its weight”. Mattress weight doesn’t lie. Most people remember how heavy the two-sided mattresses of the past used to be and when you compare them to their modern-day one-sided replacements, there is simply no comparison. The reason new lightweight 1 sided versions contain less overall steel in their construction and 2-3 times the amount of cushy soft foam. Adding to the problem the cushy soft foam layers have less density meaning many many layers of aerated soft foam making settling of the upholstery layers and speedy mattress failure imminent. The fact is old two-sided mattresses contained more steel, they were thinner and used little if any foam contributing to long mattress and comfort life.

Other contributing factors of shorter mattress comfort life are that the two-sided mattresses go back to a time when manufacturers built mattresses to be better than their competitors. It was a time when profit margins and retail price points were not the bottom lines. Today building costs are also partly to blame, beds of yesterday were not affected by double-digit price increases of high priced oil and the world demand for steel the primary building components of virtually every mattress system made. Old beds had good structural bones about them and manufacturers built mattresses to last 10-20 years and took a lot of pride in a bed’s life expectancy while profits were a secondary thought. Today the big brand name marketing strategies have changed and include returning the consumer to the buying market in less than 10 years and shortening the buying cycle a practice manufacturers seem to be happy with. Years ago it was about how long your mattress would last today it’s about good feel and cheap prices at virtually all costs.   Education is the key to your mattress buying success know the important differences that will allow you to maximize your mattress and sleep investment.