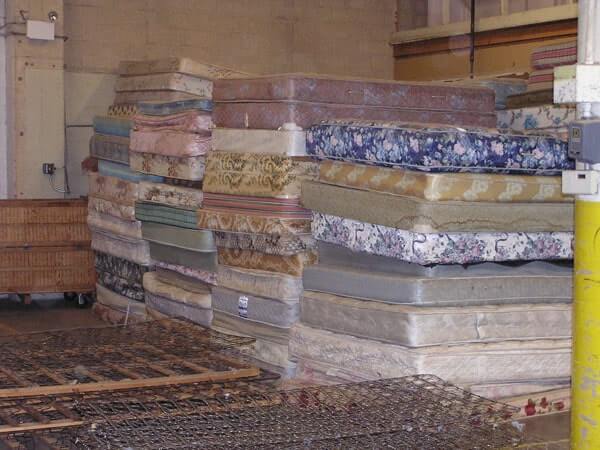 What Do Mattress and Furniture Stores Do With Old Mattresses?

Most people have no idea what happens to their old mattress

when their dealer hauls it away or exchanges it under a comfort guarantee. It’s sad but some people could care less what happens to it as long as they don’t have to contend with it. Fortunately for everyone more people are beginning to ask what happens to that old mattress when it leaves my house.

The fact is in most cases stores simply dispose of mattresses where they end up in land fills much to the dismay of the trash haulers. Old mattresses are unsanitary, hard to handle, and do not easily compress or compost. Once in the land fill such things as non biodegradable materials, synthetic fibers, and the large amounts of chemicals used to build them and make them fire retardant could affect our earth leaching out into the ground water.
You might ask “Why not recycle them?” Here several problems come up.

We’re not saying it’s the best or healthiest decision for mattress seekers, but a large portion of them do find new homes through flea markets, second hand shops, and Craig’s list. I don’t condone this because people have to do what they have to do to afford a mattress and it often beats sleeping on the floor.

Other ways old mattresses are gotten rid of

Many second hand stores and retailers of so called “new” mattresses have been exposed for improperly recovering old mattresses illegally or not properly sanitizing them to meet laws to protect used mattress buyers.  When these mattresses don’t get stripped down and recovered with new materials or at the very least sanitized you just don’t want to know what’s on the inside. Shockingly these mattresses are then rebagged and are sold as new which should be illegal under the new federal fire code #1633. Sometimes required law labels are faked or not even present on the mattress notifying the consumer of contents and proper fire safety certification.

So what will happen in the future to old mattresses?

I suspect that in the very near future, recycling will become much more available to each of us. Everyone will likely see implemented some type of disposal fee which could be handled much like the deposit fee required on glass soda bottles in some states. At the very least if dealers have to pay for disposal of an old mattress it’s like every other expense it will be passed on to the consumer as a cost of doing business.